James Mason only stopped off for milk, but is now Set For Life having claimed a $5 Million win on the New York Lotto.

His wife didn’t believe he had won – she was too busy watching The Batchelor on TV. His daughter who was waiting to be picked up, said she didn’t care if he had won $10 Million, “come pick me up now”!

Things changed when he showed them the ticket later.

James says he won’t be wasting his win, this was a once in a lifetime thing. 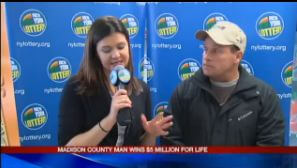