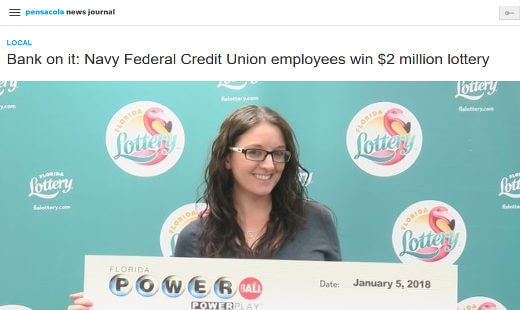 Regina Spence could not believe that one of the 33 tickets she had purchased from Circle K at Pensacola Boulevard had won the syndicate group of 32 Navy Federal employees $2 Million. She literally started crying when her roommates said it was a match and they were indeed the winners. Regina says that she missed Florida Lottery’s jackpot of a whopping $570 Million by only one other number. The $2 Million winning combination of numbers only needed the number 12 for the jackpot.

The entire winning amount will be divided between the 32 ticket holders syndicate, so each will get a modest $45,000. That’s after tax and other charges. Spence has disclosed the plans of what some of the winners have planned to do with the money. One of her colleagues plans to use the money for her wedding. Another plans to get her kid a new pair of shoe. Everyone in the group is happy that now they have some extra money for their respective necessities. She herself plans to pay off her student loans and credit card bills and get a new refrigerator for her parents.

The news seems to have spread a lot as Spence reports a spike in her Facebook activity. Random people have been messaging and congratulating her on her social media account. Spence said some of the messages were hilarious and people were thinking she is the lone winner of the amount. However, Spence’s post clearly says that it’s an office winning and she herself is not the sole winner.