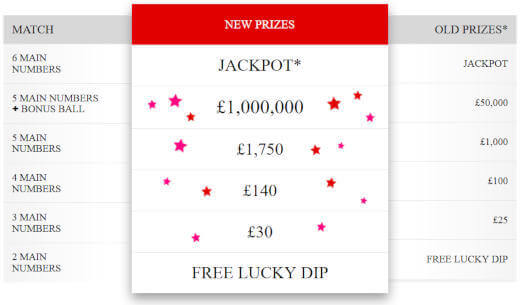 Another round of changes are coming to the UK Lotto, starting with the draw on 21st November 2018.

They are a bit of a mixed bag though, so here’s what you need to know.

The key changes are:-

You can read more about these 2018 changes in detail here.

The changes are supposed to have all been made as a result of listening to feedback from players. Mostly feedback that players were frustrated at how often the game rolled over – players wanted more jackpot winners.

Unfortunately although the changes are an improvement overall, I’m not sure this really achieves that goal.

If the jackpot is not won on the 5th rollover draw, then the money is paid out. But the roll down rule has also changed significantly – the money is now shared between all prize tiers. It no longer just rolls down.

That would be OK, except Camelot have decided to allocate an enormous 74% of the funds to the Match 3 prize tier!

This is a shame because it effectively removes the chance of winning a life changing sum (“a jackpot”) as a result of a roll down draw. Instead it just turns all those Match 3 prizes of £30 into something nearer £100. Which is nice, but very dull. It’s probably a bit of a popularity play by Camelot – but is really a poor change when you dig deeper, especially considering what players wanted.

It is nice however to see a significant 2nd tier prize of £1 Million. But what they give with one hand they take away with the other – no more Lotto Raffle to give you a second chance of winning.

So as I said, a bit of a mixed bag. At least they haven’t increase the number of balls or ticket price 😉