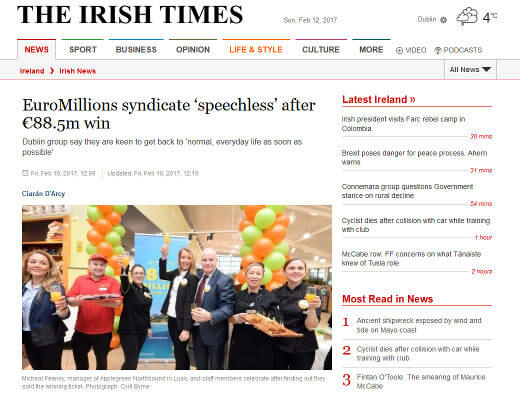 It is no secret that people join lottery playing syndicates to increase their chances of winning big jackpots. The bigger chance of winning comes at a price though – every win has to be split with the other members of the group. That’s not a problem if you choose the right EuroMillions syndicate though as a big win can still be a big win for everyone. A group of Irishmen from Dublin are certainly glad they played as a group. One of their tickets has won €88.5 million from the Euromillions!

The group, who all want to remain anonymous, said all of them were stunned when they learned of the win. The lottery has not been given leave to release details about the winners such as their identities, the number of members or even their line of work. What is clear is that there are 80 members – which means each will still take home more than a million euros.

The group shared that among their plans are payment of bills, mortgages and loans. They also all look forward to the financial freedom their win will give. They bought the winning ticket at an Applegreen service station in Lusk, Co Dublin.