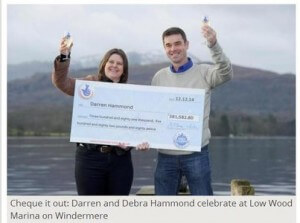 A hotelier from the Lake District won a significant jackpot without queuing up for a lottery ticket.   Darren Hammond  from Ambleside won using a lucky dip ticket he purchased online.  And the best thing about his win is the timing; just a week before Christmas.

He was checking his mail when he found one which congratulated him for winning what he initially thought was only £381.  It was only on his second look when he discovered that he had actually won £381,582.80 in lat Friday’s draw of the Euro Millions Lottery.

Now Hammond,  his wife Debra and three children are busy planning what could be their most extravagant Christmas celebrations ever.