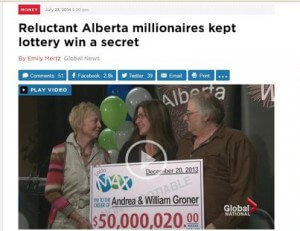 What would you do if you won a $50 million jackpot?  There may be as many answers as the number of people asked, but it is hard to imagine winners waiting as long as seven months before making a claim; a month or two maybe, but 7 months seems almost unthinkable.  But that is exactly how long it took for Andrea and Bill Groner to make their claim for a $50 million Lotto Max jackpot they won in Dec. 2013.

They purchased the ticket at the Shefield Express store in the Londonderry Mall.  When Andrea heard the winning numbers, she checked through a self scanner with the help of a clerk.  And she and her husband decided to live as they had before, while they planned what to do with their sudden fortune.  They have already informed some friends and family before they made their claim.

After waiting for seven full months of waiting, they should have everything well planned, though they have made no statements as to what they are.