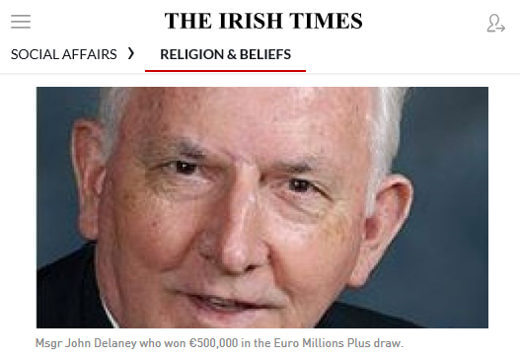 There’s no law barring priests from playing the lottery so we must assume some of them play hoping to fund the needs of their flock or merely for amusement. But what happens when one actually wins something significant?

Florida-based priest Msgr John Delaney plays the lottery and sometimes wins sums some would consider significant. He travels to Co Mayo often and also plays the lottery while he’s there. It was this latest trip home for the Christmas holidays which gave him the most significant win ever.

He bought a EuroMillions Plus lucky dip and thought nothing of it until he had the ticket checked and the clerk discovered he had won €500,000.

“I went back to the shop and gave the ticket to the same girl I had purchased it from to be checked. Lo and behold, there was a message on the system to contact the National Lottery. So I knew at that stage I had won.”

He now jokes that God must be hearing his prayers. But he is really serious about giving some of it away as he does with every win.

The shopkeeper at Donnybrook Fair Tatiana Rusu was happy at Msgr Delany’s winnings and said he bought another 2 tickets as he informed her of his winning the lottery. She also described the lucky priest as a nice gentleman and wished him luck.