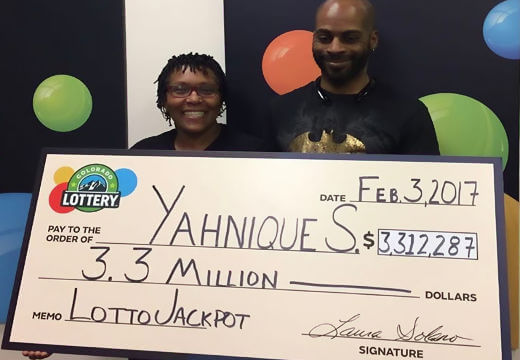 Did This Woman Predict Her Own Lottery Win?

By now we have heard many things people do after winning the lottery. Some quit their jobs to enjoy a life of luxury, while others prefer to continue working even if they can afford not to. These things don’t surprise us any more.

But then the story of a Colorado woman stands out for being far from usual. She quit her job a few days before winning the lottery. And that has created a lot of buzz.

The winner is a woman named Yahnique S., her full name withheld at her request. She is a mother to three grown offspring and till a few days before her win was working as a nursing assistant. She lives with her husband Bruce and three sons aged 17, 21, and 24.

They were regular working people with jobs to do and bills to pay. And Yahnique has been playing the lottery for about 30 years. In that time she has not won anything substantial – till now that is!

Need some help boosting your own winnings – check out our lottery tips here.

The woman has been working as a nursing assistant for so long that she felt burned out. She was so tired of her work that she impulsively decided to resign from her job. Her last day on the job was mid-January. How impulsive was her decision? She decided to leave her job even though she hadn’t found a new job yet! But because she tried her luck at the lottery continuously for the last three decades, things worked out surprisingly well for her.

Her luck turned when she bought a quick pick Colorado Lottery ticket at the King Soopers at 115 South Havana in Aurora one Saturday. When she checked the results on her computer after the draw, she was stunned to find that all her numbers matched those drawn. Unable to process it properly, she asked her husband Bruce to take a look.

Initially, her husband thought it was just a prank, but there was no denying the numbers shown on the computer screen. He thought she may be good with computers, but not so good she can make up a prank lotto website. They had really won a $3.3 million lotto jackpot.

Now people are wondering if she was somehow clairvoyant and predicted her win. Else, why had she left her job days before she won? Some may also be wondering if it was faith which made her resign from her job without first finding a replacement.

But the winner has just one explanation. She could not stand her job anymore, using the term ‘burned out’ to describe how she felt about her previous job. She had no way of knowing she would win days later.

But if there is something that surely worked in her favor, it would be that she has been playing for more than 30 years. Though science says your chance of winning is the same no matter how long you have played, some will still argue that after more than 30 years of not winning anything significant the odds would have been in her favor.

Whatever the case, she still walks away with $3.3 million before taxes. She and her husband have wisely decided to receive the full amount of winnings spread over 25 years. Whether she will get the urge to work again is not known. What is known is that now she does not have to. For now their priority is paying off their bills and making home improvements.

Somehow how she won does not seem that important. What is important is that they have made sound decisions that seem to indicate they will be prudent with their newfound wealth and it is likely to serve them well for the rest of their lives.