The Albany lottery winners have been revealed.

The lucky office pool of 7 that won last Friday’s Mega Millions have now been made public via a press conference in Schenectady, New York: 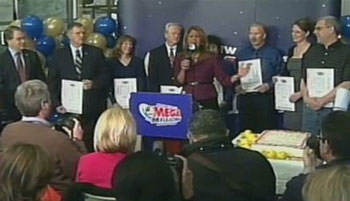 The pool of IT workers all put in $2 each when the jackpot is over $100 Million. This time the group bought a total of just 7 luckydips for the draw. One of which hit the jackpot.

As soon as one of the group realised they had won, the phones of the other members started ringing in the early hours of Saturday morning.

Being IT workers they all assumed it was bad news about another server problem that needed fixing. The reality has still to sink in, as Kristin said:

I’m really not prepared for it. It’s a wonderful thing, but it’s so much to sort out and deal with.

The $319 Million winning ticket however was still at work, in Mike’s desk drawer. So John headed in to work to secure the precious ticket.

John wasn’t sure quite what to do with it to keep it safe, so came up with a somewhat bizarre solution:

I didn’t know where to put it. I had a bucket of rock salt and a 5-gallon bucket of bird food in the garage. I thought the rock salt might eat the ink off the ticket. So I put the ticket in the bird food and hid it in the basement.

The Albany 7 will take home $19.1 Million each after taxes.