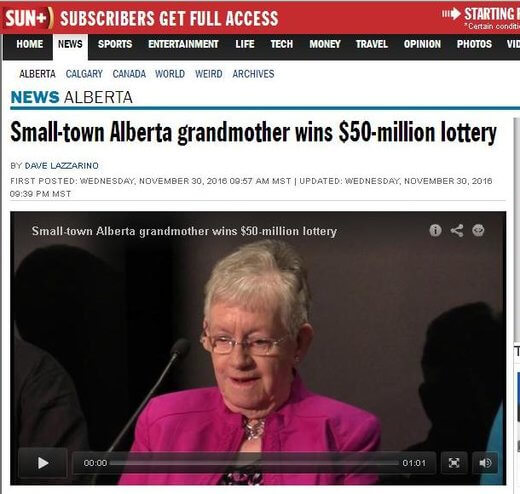 Let’s put that win into perspective.  $50 million can pay for the town’s expenses for 40 years and is equal to 38 times its annual revenue!  Olsen had been farming in Irma since she married her husband and can still remember the hard times they went through.

She says they did not have plumbing till 1966 when they had a new house.  For the first time they had running water and a telephone!  She says she used to milk cows by hand before they bought a milking machine.  In fact their family received the Alberta Century Farm and Ranch Award recognition of 100 years of family farming on their original homestead.

But when she checked her ticket to the store on Nov. 12, all that changed.  Suddenly she was $50 million richer!  But initially she thought it was just $500, till she checked it again with the girl at the store.

Now she is happy to buy an SUV and help out family with her win.  She may also go on a trip to Ireland.  She only regrets not winning 30 years earlier when she could have enjoyed it more.