When Jim Hartlin went into a Holy Smokes retailer for a “Team Canada” hat and a lottery ticket, he had no idea his life would change. 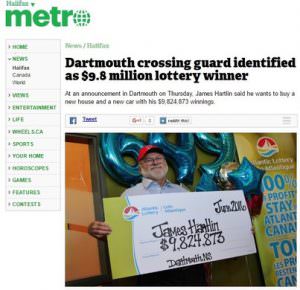 But when his numbers matched all six drawn in the 6/49 Lotto, he was overwhelmed by the size of his windfall.

Hartlin was later presented with a check for $9,824,873.50 at the Atlantic Lottery office in Burnside.  He is now set on retiring from his job as a crossing guard.  He is also looking forward to a new house and a new car to match.