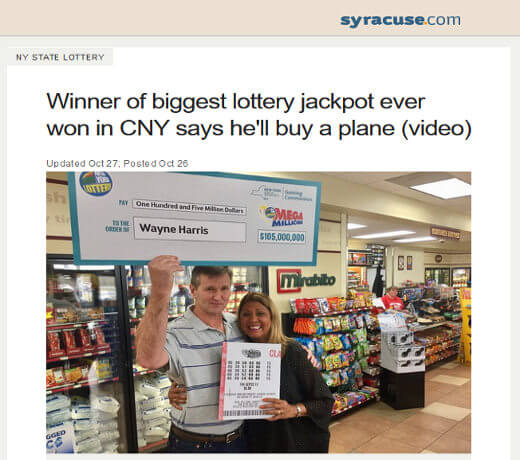 When you’ve got millions you can do almost anything. This is what an electrical engineer from Homer found out after posting a huge lottery win and then deciding he wants to buy a plane.

Wayne Harris says he uses numbers which come up recently to make up his number combination. When he stopped at  a gas station in Mirabito while doing some errands, he bought a Mega Millions ticket that would change his life for the better. He did not know it then, of course.

By Saturday morning he checked his tickets as soon as he woke up. He discovered that the number combination he picked of 5-39-54-63-66 and Mega Ball 15 matched all the numbers on the Sept. 22 Mega Millions draw. Suddenly, he was $105 million richer! He later chose to receive the prize as a single lump sum payment of $43,980,380 net of taxes.

Now aside from buying a plane, he wants to take flying lessons. He also wants to quit working and relocate to a place with warmer climes. But he still plans to continue playing the lottery saying you really don’t know how lucky you are unless you play.