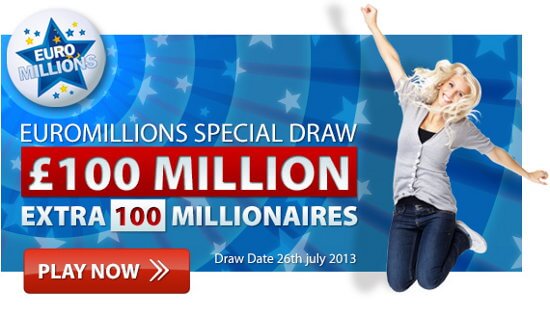 On Friday 26th July EuroMillions will be giving away an extra £100 Million.

That is, a bonus 100 x £1 Million prizes can be won in addition to the usual massive jackpot.

And Big Fat Lottos are celebrating with an extra bonus offer of their own, as one player who chooses to play in their ‘EuroMillions Club’ syndicates will also be the lucky winner of a shiny new iPhone 5.

Each group plays with 55 tickets, and significantly all tickets are bought in the UK so every ticket includes an entry into the UK Millionaire Raffle.

You can read our detailed review of Big Fat Lottos, and find the rest of our EuroMillions syndicate reviews here.

The Millionaire Raffle is a UK only game that normally pays out a guaranteed £1 Million to one ticket holder every single draw. This special draw however will see 99 extra prizes also paid out.

A spokesman for the UK National Lottery said they were hoping to beat the number of millionaires created by the last big special draw that was held to celebrate the start of the London 2012 Olympics.