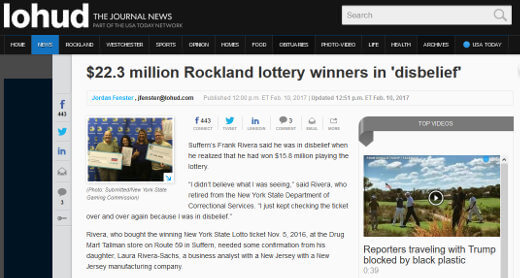 A father and daughter team from New York has just scored a hefty lottery win. Suffern’s Frank Rivera and his daughter Laura Rivera-Sachs will share a $15.8 million prize.

Rivera had earlier bought the winning ticket from the Drug Mart Tallman store on Route 59 in Suffern. The retired corrections officer said that sometime after the draw, he checked his tickets and discovered it was a big winner. He checked the ticket a few more times, as he could not really believe he had really won.

He finally called up his daughter, who works as a business analyst in New Jersey, to confirm. Though initially unbelieving, she later realized they were indeed big winners after checking the numbers multiple times. Each of them will take home $3,766,686 net of taxes.