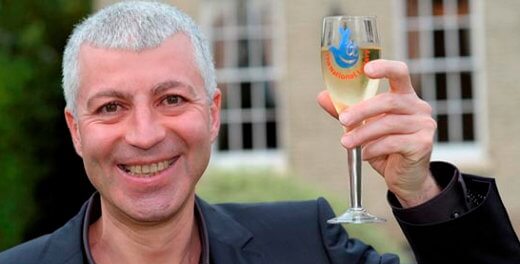 The Man Who Won Twice

There has recently been a lot of articles about the incredible lottery story involving a Bulgarian who moved to the UK more than 20 years ago.  Much has been written of George Traykov’s £1 million win in the Millionaire’s Raffle in September 2011, but when he won another jackpot of £160,873.80 in the Euromillions Lottery game in 2012, people began referring to him as possibly the luckiest man in England.

Through all of the hype surrounding his double jackpot wins, George is not that excited about it, and was even quoted as saying he considers himself unlucky with numbers.  He reasons out that in his second jackpot win, he missed winning a much bigger jackpot of £12 million by one digit – meaning, he could have won much more if he had really been lucky with numbers as people claim!

His comments immediately drew adverse reaction from the people who have been calling him extremely lucky.  After all most people do not even experience winning one substantial jackpot, let alone two.  Many felt that he was ungrateful for making that statement after posting two significant wins when most of them are still dreaming of one.

Details about his second win, such as his flying off to Mexico for two weeks before claiming the prize, skydiving with the winning ticket in his pocket and only served to fuel resentment towards his attitude towards winning. And as for his first million pound win, he did not even realize he had won till two months after the draw.

But is George really an ungrateful person?  Why would he claim he was unlucky with numbers after two wins?

The man behind two lottery wins came to England from very humble beginnings, and even had to take the bus from Bulgaria because he could not afford the plane fare.  He is a serious man who spent his free time learning English so he can advance in life in the UK, when most of his mates were having a good time.

He settled in Ilford about twenty years ago and even after winning two jackpots, still lives in the same house he bought in the area about sixteen years ago.  He says he loves the place, and gets along well with his neighbors.

And the reason such amounts of money does not excite him so much?  He says this is because he does not spend more than he earns, so there are no major financial worries.  His feet remains firmly planted on the ground and the huge windfalls have not really changed his lifestyle very much.

His comments about his being unlucky with numbers seems to stem from his expectation of returns on investment, rather than an outburst from an ungrateful person.

The Secret of the Twin Jackpots

There may be some lessons to be learned about winning lottery draws from his story.

Persistence is one virtue that helps.  He has, after all been playing the lottery since he came over more than 20 years ago, and did not stop even after his first win.  Even now he continues playing, and hoping for the next big win.

Using the machine to pick out number combinations is another tactic he uses.  Since he claims he is “unlucky with numbers” he lets the machine choose.

But more than all that is the winner’s attitude that George seems to have.  Since he is very careful with his finances, he would still have been living the life of a winner with or without the jackpots.  The two windfalls just seem to be icing on the cake.

Since he still continues to play, statistically, he has as much chance as the next guy to post the next big win.  His lottery adventure story is not yet over.