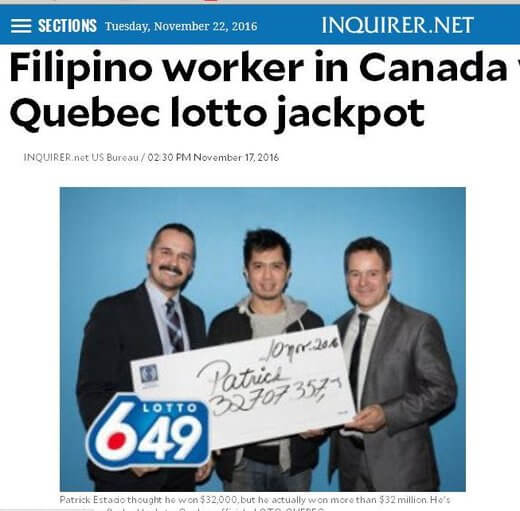 It is a real rags-to-riches story for  Filipino Patrick Estacio, who moved to Canada only a couple of years ago.  The guy was living on a rooming house in  Montreal and working 2 jobs just to make ends meet.  But still he found a way to dream of finding a quick way out of his predicament by investing on a lotto ticket now and then; he must be very glad he did.

He gathered his wits and went to the lotto offices on the same day, Nov. 10 to make his claim.  The size of the win is so unexpected that the winner still has no definite plans for the money.  He says he may buy a house or a condo and then take time to think of what to do next.  He says he wants to stay humble and live a simple life.

The Tabagie Métro Du Collège has earned 1% of the prize money ($327,073) for selling the winning ticket