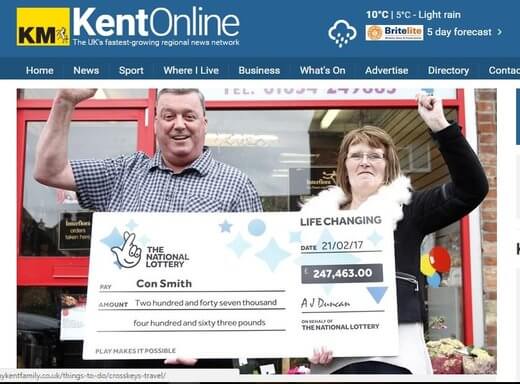 A florist has won almost a quarter million pounds in the  lottery. Con Smith says this is the latest in a series of blessings his family has received recently.

The winner shared that he had brought his father home from the hospital after he had made a miraculous recovery from serious illness. While food was cooking, he took the time to visit a newsagents shop in Rochester where he had never been before and bought a ticket.

When he used an app to check results later on, it gave off a beep. He was surprised to find he had won £247,463! He immediately told his wife Lorna, who has been working in the florist shop with him since 1992. She made him do an urgent delivery of flowers before letting him ring Camelot for confirmation.

The couple says they will prioritize paying off debts and helping their two grown children. Whatever is left they want to invest in their business.

While the money is not enough to retire on, at least they’ll have more time to smell the roses!