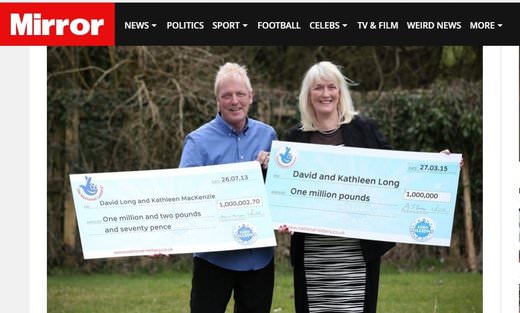 A pub which had earned a reputation for being “lucky” after a patron won the lottery twice in the space of two years has another reason to celebrate. The pub landlord himself has just won his own million pounds from the lottery.

David Long had won his first  £1 million back in 2013. That was for  £1,000,002.70 to be exact, and he had already thrown away his ticket thinking it was just  £2.70, but then retrieved it so he can buy a newspaper. Then they told him he had really won a million more. The win was replicated in 2015, when he won a full  £1 million off another lottery ticket. People started to associate luck with the Mallard pub, which he continued to patronize.

But now that pub landlord Ian Brooke himself has won his own million, the lucky pub reputation seems to have been validated. He now says he will give two of his best friends  £125,000 each, to make good on a promise he had made previously.

Long, who was a struggling HGV driver before his first win, married his fiancee of 12 years. He has also bought a new car and treated his family from his winnings.