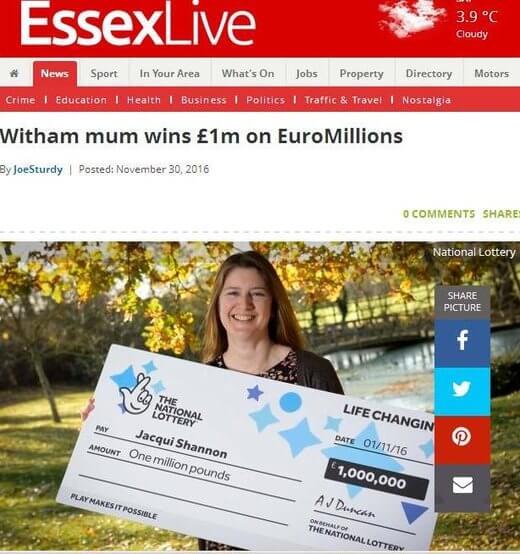 A mum from Witham has just become a lottery millionaire without having to queue for a lottery ticket.  Jacqui Shannon buys her lottery entries online a few weeks’ worth at a time.  That may have made her overlook an email message right after the draw that said she had won.  She’d had that kind of message before and it had been for small amounts.  But this time it was different.

She was at work three weeks later when she found the time to read the messages carefully, including the second one which said she had won a million pounds.  She excused herself and called Camelot to verify.  After lottery people informed that she had indeed won the Millionaire Maker draw, she immediately called her husband; then she tried to keep a straight face as she continued working the rest of the day.

Now she has made plans for her money.  She and her husband have decided to start a fund to help their son later in life.  As she had been worrying about keeping old cars working before the win, she has already bought a BMW 320 for her husband and will purchase a Mini for herself.  She may also buy a new house, but has no plans to stop working as yet.