A homeless man who was pranked into thinking he was a lottery winner is homeless no more.  Internet prankster Rahat, who was moved by the homeless man’s generosity despite his financial condition raised money to buy Eric a house.

It all began as a prank, with Rahat giving a ‘winning lottery ticket’ to random homeless man Eric.  The whole thing was captured on video as Rahat usually posts pranks on the internet.  The ‘winning ticket’ was fake but the clerk at the store was in on the prank and declared Eric a $1,000 winner.   Homeless Eric insisted he needs to share the money with Rahat.

The man’s generosity moved Rahat to start an internet fund campaign that raised $44,000.  He found a home and took Eric to his new digs.  The money has paid for the full year’s rent on the house, for appliances, clothes and just a little less than half on a bank account.

Best of all Eric has found himself a job. 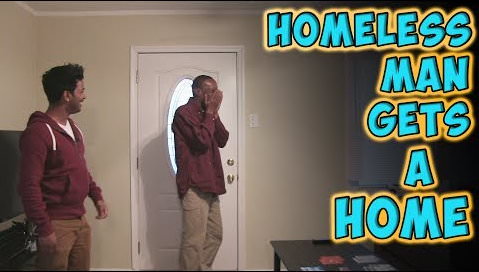