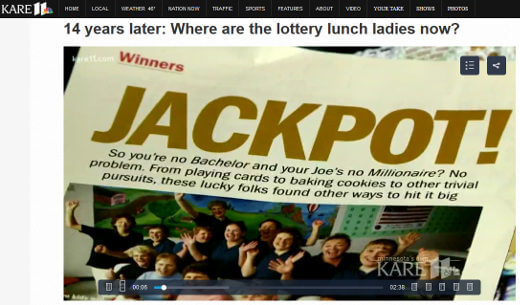 Have you ever wondered whatever happened to the “Happy Huskers” lottery syndicate who walked away with a $95 million lottery jackpot 14 years ago? Well according to two of their members they’re all well and happy.

When Donna Lange jokingly told 15 other members of their lottery syndicate they won’t have to work the following Monday because they’ll win the lottery, she had no idea it will actually happen. But by Monday, they announced their $95 million win after serving lunch at the cafeteria as usual – not bad for a 25 cent contribution from each person.

Donna immediately retired and built a home which she has since swapped for something smaller. One of her priorities is to give to charity. Her colleague Barb Nelson was able to comfortably pay off college, raise young children, invest in her dairy farm, and build a modest home from her share.

While majority of people who win the lottery lose it within a few years, all sixteen haven’t squandered their winnings. In fact, some of them still work at the school cafeteria. Both Nelson  and Lange say members of their group have hardly changed after the win.