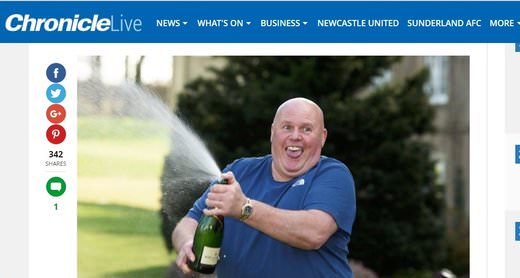 A bar Barmanager, who says he isn’t much of a drinker, celebrated a EuroMillions Mega Week draw win with a glass of water. Kevin Piper had won £1 million on UK Millionaire Maker and chose the cash option instead of a Hawaiian Adventure package for another £93,000! He later popped a bottle of champagne as he received his cheque at Ramside Hall in Durham.

Interestingly, Piper says he never really expected to win this big. But when he asked the store assistant to check his ticket, the machine made an unusual noise and he was told to contact Camelot.

The 55-year old single man says he had booked a trip to trip to Thailand this month before he learned of the win. Although he will not upgrade his plane ticket, he plans to check in to a better hotel. He plans to use his tow-week vacation to try to figure out what he want to do with all that money. One thing this win  allows him to do is get his hip problem treated without having to wait for a long time for the NHS. He says once he has his hip fixed he plans to return to playing golf.

He bought the winning ticket at Spar in the High Street in Durham, where he buys all his tickets.