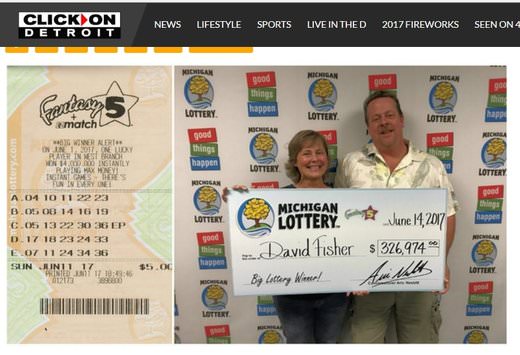 Sometimes playing the lottery is like putting in money on a retirement plan. At least that’s how it worked out for a Brighton man.

David Fisher says he has been playing the same number combination on the Fantasy 5 lottery game for years. And he always jokingly told friends that if he won he would waste half at the casino. But now that the combination 05-13-22-30 and 36 which he has been faithfully playing has finally come up, Fisher has changed his mind.

He says that on Sunday night he went to different outlets to purchase lottery tickets in the hope of winning. When he checked results the next day, he was shocked to find that he had won a jackpot of $326,974. He was so stunned he had to ask his sister Donna to verify the numbers.

The lucky winner wrote $1,000 checks to close family members and then kept the ticket in a safe place. He finally turned up at the lottery headquarters to make his claim on Wednesday.

Instead of squandering the money like he joked, he says he plans to buy a Corvette and save the rest for retirement.