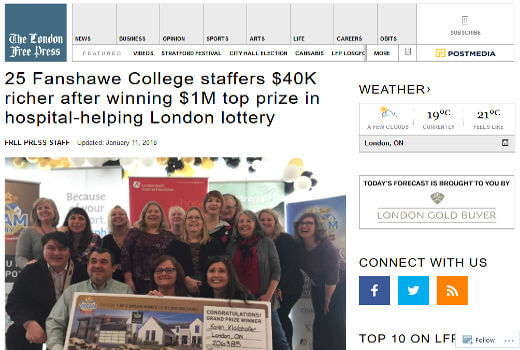 A group of 25 workers from Fanshawe College celebrated on Thursday after claiming the top prize in the Ontario Dream Lottery.

The jackpot is normally a choice of two $1.4 million homes. But given the syndicate group winners were not keen on all moving in together they chose the cash lump sum option of $1 Million instead, paying each member of the group $40,000.

Karen Kloibhofer, who headed up the sydicate, was phoned to be given the news by one of the heads of the hospital foundations. She said:

“Is that true? Oh, my goodness, that’s amazing, I know that you’ve just made 25 of us insanely happy.”

Karen was home sick with a sinus infection but still managed to drag herself out of bed to the award ceremony, to cheering and the odd hug from her co-workers.

A spokesperson for the Dream Lottery, Rita Feeder, said that the win was quite remarkable for two reasons. Firstly, she couldn’t recall a time when a group play had ever won their lottery game. But also the actual ticket that won was a free bonus ticket the group had received in a draw for extra tickets. So not only was it a double win for the group, this was also the first time that one of the free tickets had won the jackpot.

The Dream Lottery is a charitable fund raising game, to raise funds for the London Health Sciences Centre, the Childrens Hospital and St. Joseph’s Health Care London. It is run each Spring and Fall, with this particular draw raising in excess of $1.5 Million. The game has generated over $31 million for the London hospitals since it started back in 1996.