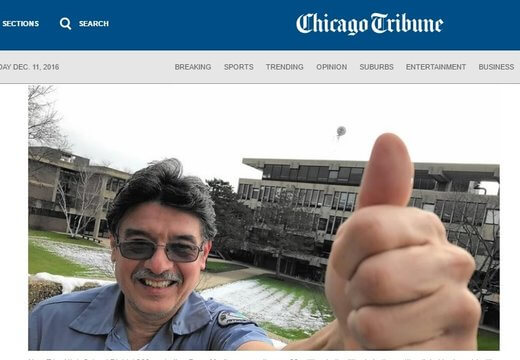 A man working as a custodian at New Trier High School is all   smiles after winning enough money to retire on.

Dave Martinez has been working at various campuses of the New Trier High School since 1982, where he is well-loved by students and staff alike, and who affectionately call him “Speedy.”  His main job is to conduct traffic in the morning and afternoon and to help set-up ball games.   Like his father, Martinez also tries his luck with the lottery.

On Nov. 18, he bought a lucky ticket at the Citgo station at 3419 Grand Ave. in Gurnee which gave him a $100 payout.  He thought about buying another one but postponed it for the next day.  Next day he went back to the same Citgo, and bought an  Illinois Lottery Merry Millionaire scratch-off ticket along with his morning hot chocolate.  That’s when he saw the $100,000 printed on the ticket.  He later realized it was for $100k a year for twenty years and could not contain his excitement.

At his wife’s suggestion, he calmed down and acted as if nothing happened for two days.  On Nov.21, his 60th birthday, he made his claim and opted receive $100k over a 20-year period.  He has since bought himself a Jeep Cherokee.  He says he will invest some of the money, go on trips to Hawaii and Daytona and his his grown children.