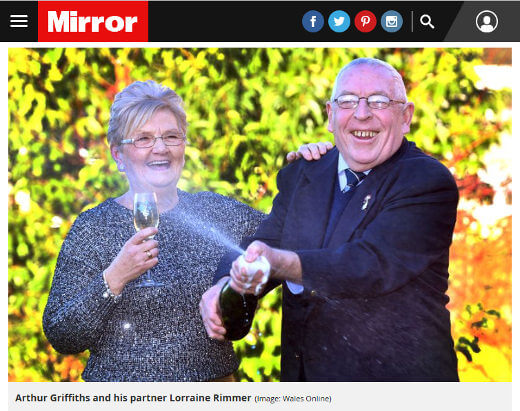 An 81-year old man who won £1 million from the Euromillions UK Millionaire Maker draw on December 15 spent Christmas as normal. At that age, that is real restraint!

But lucky winner Arthur Griffiths has other good qualities. Persistence is one of them. He has been playing every week in partnership with his mate the owner of the Green Acres Hotel since 1994. But this win, on a Euromillions ticket he usually doesn’t buy, is his alone.

The former steel worker and choir member bought the ticket using change from a milk run. He checked the results on the morning after the draw and was stunned to see that he had won a cool million pounds.

But Griffiths will not splurge a lot. With his winnings he plans to have his home renovated and to purchase a debenture ticket at Cardiff’s Principality Stadium. And he will buy the more expensive of two three-piece suite he had been eyeing at a store.