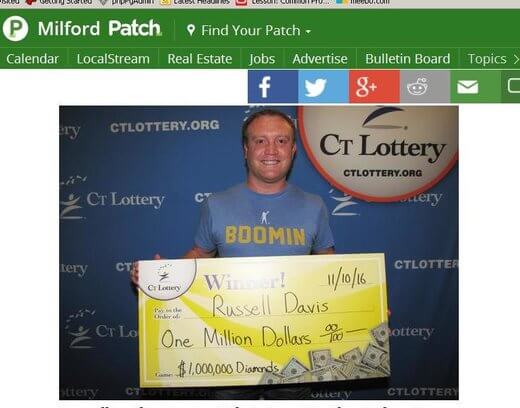 How do you go about winning a million bucks?  People will tell you of different methods, systems, or lucky charms they use.  But Milford resident Russell Davis says his winning formula involves combining luck, chance and good karma!

While Davis was buying lotto tickets a few weeks back, the clerk handed him too much change.  Wanting to do the right thing, and perhaps also trying to load up on good karma, he returned the extra money to a grateful clerk.  In fact he was hoping that karma would kick in soon,  as he left the store with the “$1,000,000 Diamonds” ticket.

He was stunned when he scratched off the ticket.  He had won the million dollar top prize!  The winner says he must have checked the ticket hundreds of times.  He even called his two brothers over to take a look at the ticket too, before accepting the fact that fortune has really smiled on him big time.

He has since chosen to receive the prize as a single payment of $720,000.  He wants to use the money to pay off bills, help family, and upgrade his football game tickets!