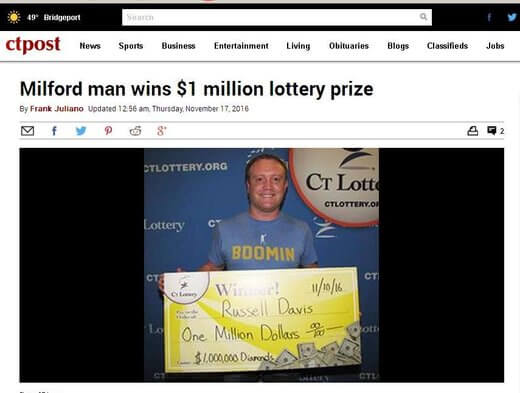 Pessimists say often say “no good deed goes unpunished.” Fortunately, some people like Russell Davis, still do the right thing if only for the sake of doing good.  In fact the lottery seems to have ‘punished’ Davis with a million dollar prize!

When he visited Sure Mart at 695 Bridgeport Ave., a clerk there overpaid him.  Davis was quick to give back the extra amount, perhaps hoping some “good karma” will come his way.  He bought Connecticut Lottery’s $1 Million Diamonds instant tickets and the time he left the store he was a million dollars richer.

Davis found it hard to believe that he had won the game’s top prize that he phoned his brothers over to double check.  He says he must have looked at the ticket more than 300 times!

When he went to the lottery offices, he later opted to take the prize as a single lump sum payment of $720,000.  That’s not such a bad ‘punishment’ for a simple act of honesty!

Now he plans to use the money to pay off bills and to help family members.  He also says that he will upgrade football game seats so he can watch his favorite team up close.

Sure Mart didn’t fare so bad either, earning a bonus of $10,000 for selling the winning ticket!