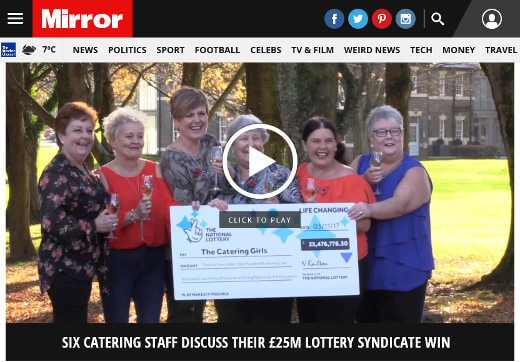 How much of a problem can six people winning big in the lottery be? For the catering department at Neath Port Talbot Hospital, it means having to look for six new people.

Ironically, the group were not really supposed to win. That after member Louise Ward started to think of leaving the group to save for her upcoming wedding. Good thing she didn’t as it was her numbers which hit the £25 million EuroMillions lottery jackpot.

When EuroMillions syndicate leader Julie Saunders heard that just one ticket won the jackpot, it prompted her to check their entries. When she discovered one ticket’s numbers matched, she immediately contacted Camelot and then  told her friends.

While one member is already retired, the other five decided to put in their notices once they learned of the win. They say the have been in their jobs long enough and it’s time some other people took their places.

As each member will be pocketing in excess of £4 million there’s lots of talk about holidays, houses, shoes and bags. As for Julie, she can now have the wedding of her dreams and not have to worry about the number of guests.