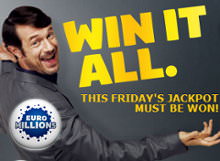 The EuroMillions roll down rule is now in effect.

This weeks Tuesday draw saw the jackpot frozen at the €190 Million cap, and funds in excess of this  roll down to the next prize level.

Which meant that players who only Matched 5 main numbers + 1 Lucky Star received prizes far in excess of the usual amount. Normally they would have received less than €300,000. But due to the roll down, 7 winners each received €2,318,241,10 – nearly 8 times the usual amount.

And things get even more exciting for this Friday’s draw.

Due to the new roll down rule introduced in February, the full jackpot will now roll down if nobody matches all the numbers.

That means the jumbo jackpot will be paid out this Friday, guaranteed.

And it could also mean 2nd prizes that are worth 10’s of millions, if nobody wins the jackpot outright.

So if you haven’t already, now would be a very good time to buy yourself a ticket, or find a syndicate you like.