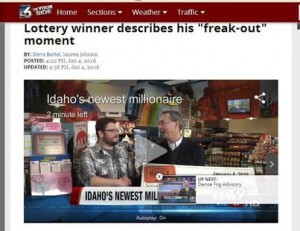 When he bought the “Idaho $1,000,000 Raffle” at the Maverik at Locust Grove and McMillan in Meridian, all Jacob Christopherson was angling for was the $1,000 prize on each 25,000th ticket sold.  But fate had other plans.

When he checked his tickets later, Christopherson was surprised to discover he had won the million dollar top prize.  He immediately called his mother and then also his girlfriend in quick succession.

He plans to invest a portion of the money, use some to help pursue his passion for golf and to give financial assistance to his mother.