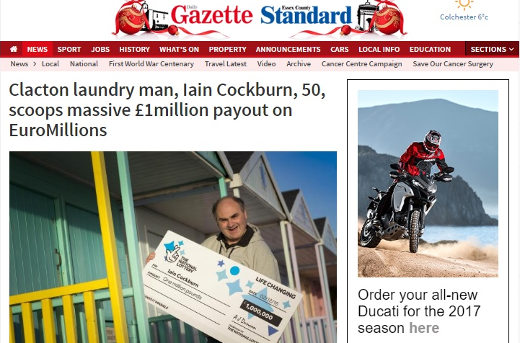 Clacton laundryman Iain Cockburn had a habit of buying lottery tickets and getting them checked at the same store.  Over time the tellers would either advise him that he’d won nothing or congratulate him for winning a small amount.  Thus, nothing prepared him for a particular Saturday when he walked in to the local McColls newsagents on North Road.

That day the teller started whispering among each other then turned round and told him they think he had won a million pounds! The teller was right; Cockburn realized that he is a new millionaire!  That shocked him, but he managed to remain calm enough to get home and tell his mum.  But now the lucky winner has decided how he wants to spend part of his winnings – he has bought a new house.  They will not be able to move in before Christmas though.

Cockburn bought the winning entry from the same McColls newsagents on the way home from work.