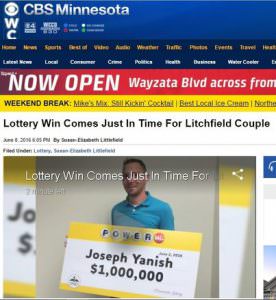 A farrier from Litchfield, Minnesotta bought two lottery tickets at a gas station, just because he had a few dollars to spare; now he has much more than that.

One of the two tickets revealed a million dollar jackpot prize.  The win came just in time as medical bills had been mounting for Erin.  To add to their blessings they found out a few months back that an organ donor has been found for his wife.  Now the couple plan on tithing, paying off their bills, building a small house in their farm and going on a family trip to Disneyland.  They also look forward to helping other people with similar problems.