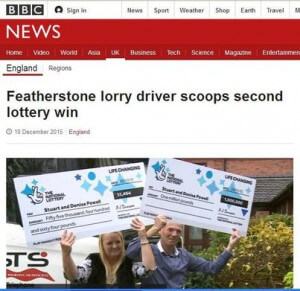 When lorry driver Stuart Powell won £55,000 in 2011, he was happy but it was not enough for him so he continued playing.  Now four years later, his patience has been rewarded by a bigger win – this time he scooped £1 million in the Euromillions UK Millionaire Maker Draw.

This time he was not even out to buy a ticket for that draw but the shop keeper mixed up the dates.  Powell says he intends to give all the money to his wife and their three sons, as he did with his previous win.