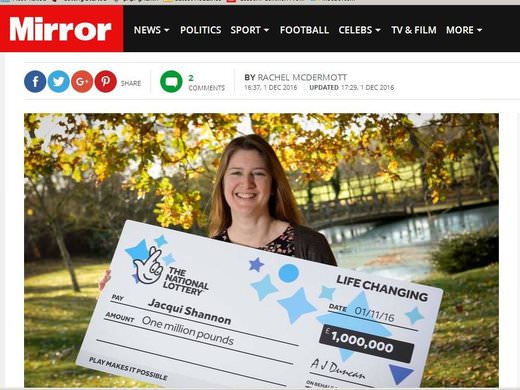 A charity worker needlessly worried for about financial matters for three weeks just because she couldn’t be bothered to check her emails.  Mum-of-one Jacqui Shannon was actually worried about having her old car pass MOT registration requirements.

She always purchases her lottery entries online and in bulk, several weeks’ worth at a time and she really plays the lottery more to help fund the charities it helps, but she also hopes to win one day.  The routine of purchasing tickets that give out small wins at most may have made her complacent – so much so that she had these emails from the lottery she had not bothered to properly check.  One of the emails informed her that she had won.  Having won small amounts previously, she was not too excited about it.  But as it turns out she should have been very excited.

She was at work three weeks later when she decided to finally open the emails from the national lottery.  She came to the one announcing she had won the millionaire maker draw and had to excuse herself for a while.  She called Camelot to confirm and followed that up with a call to her husband.

She has already bought a BMW 320 for husband Peter and plans to buy a Mini for herself.  Now that she’s got the money she is planning a trip to Dubai to visit her sister.  And yes, she is also considering buying a new house.