Man In A Bear Costume Picks Up Lottery Check 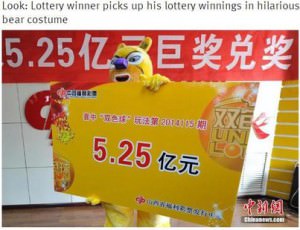 Some countries and states require lottery winners to reveal their identities to provide evidence of their game’s transparency and fair play.  Other states allow winners to remain anonymous to protect them from friends and family who would like to ask for a portion of the winnings, and from scams.

The Chinese lottery allows winners to remain anonymous so long as receive the prize in person in a ceremony broadcast nationwide.  This has led many winners to use colorful costumes when receiving their prizes.

The latest winner, a man, came dressed up in a bear costume to collect a huge 520RMB jackpot from the Shanxi province’s welfare lottery.  The winner said he had been spending 20,000 to 30,000 RMB per year in lottery tickets.  Now he has enough money to buy lottery tickets for the next 1700 years or so.