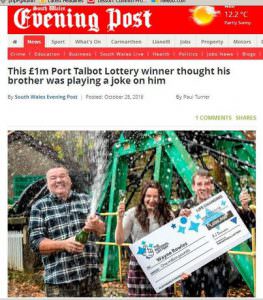 A professional carer had so often been victimized by his brother’s practical jokes that when he found his Euromillions ticket had won a million pounds he thought it was just another prank.  He even confronted his brother about it.

Reality set in when his brother seemed really puzzled and said he had not played a prank on him.  Wayne Rowles later received his £1m check.  His plans include buying a new car and a new practical joke book for his younger brother Terence.  He says this will allow him to pursue his career without any financial worries.