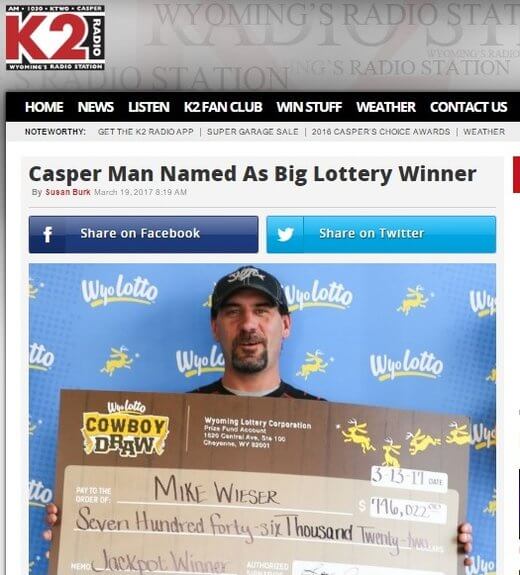 A Casper man has won $746,022 at the March 13th draw of the Cowboy Draw Lottery. Michael Wieser had bought the winning ticket from the Mountain View Conoco on Yellowstone Highway.

The Wyoming native was having coffee when they read the numbers which all matched the ticket he had in his hand. He says he just started shaking, but had sense enough to hide the ticket in a safe place before heading off to work. When he asked his boss for advice, he was told not to worry about work but to go to the Wyoming Lottery offices as soon as possible.

Now that he has claimed his winnings the man says he plans to take his girlfriend and their children on a vacation to the Grand Canyon. There are also medical bills to pay and plans to buy a better pickup. He also wants to set aside some money for the college education of his ten year old daughter.

Wieser has no plans to stop working for Sheet Metal Specialties in Casper. He says he loves the work and the people he works with.