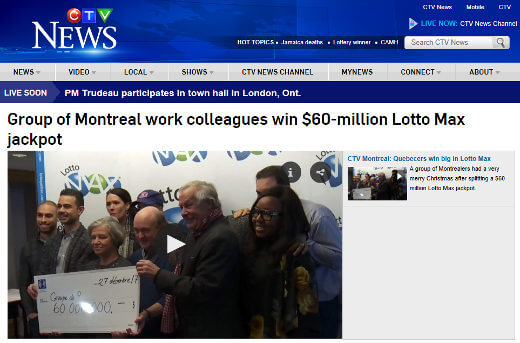 As if to prove that syndicate play offers the best chance of winning, a group of people, colleagues at work, have won a very significant lottery jackpot.

A group of nine people from Montreal won a $60 million Lotto Max grand prize. Though the group had been playing for quite some time without much success till now, it took a little tweaking of their playing style to bag the big prize. The members of the group prudently split the cost of just one ticket per draw. But this time the group decided to pitch in $20 each just because it was the holiday season and the jackpot was at the maximum level. And it worked.

Although the syndicate members work for the same company, they declined to name their employer or what their line of work is. Some of them will not even call themselves rich, despite landing more than $6 million each.

The good thing is that these people say their plans for the future will not change much and they will remain feet planted firmly on the ground.