Nolan Daniels Did NOT Win Powerball

If you’ve seen this guy around Facebook recently, you may have been inclined to think “lucky blighter, he’s now rich for life”.

Here he is holding his winning Powerball ticket for Wednesday 28th November:- 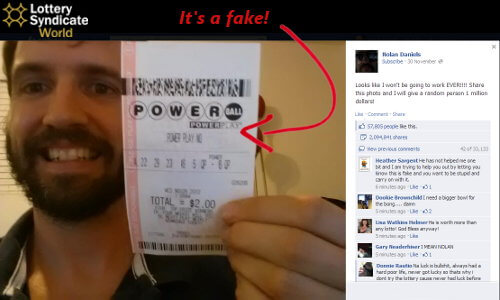 Well it turns out Nolan Daniels is not rich for life. The winning Powerball ticket he is clutching is actually a fake.

The photo, the only one on Nolan’s profile that has been made public, is accompanied by this message:-

Which is also why this has turned out to be one of the most shared photos Facebook has ever seen.

At the time of writing this has been shared a ridiculous 2,094,838 times. Mostly it would appear by people who think it’s genuine, and are interested in that spare million dollars that Nolan mentioned…

The 33,129 and counting comments the post has attracted consist of what a lottery winner without the option to stay anonymous can expect.

They range from lots of ‘good luck brand new best friend’ type messages, right through to the sob stories and begging letters that certainly won’t be hitting their mark on this occasion. No matter how true or deserving.

So How Do We Know It’s a Fake? 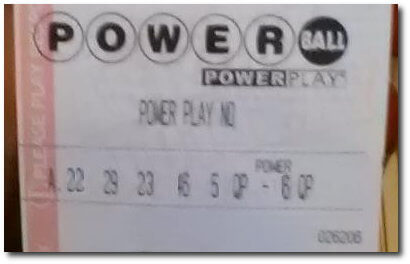 The biggest giveaway though is that in his attempt to make the ticket look more plausible, Nolan decided to randomly order the numbers on his ticket – they appear as 22, 29, 23, 16, 5.

But as any regular Powerball player should know, numbers are always printed in order on the ticket. You can also verify this fact on the official Powerball site here.

So in his attempt to look more authentic, Daniels has actually tripped himself up.

Who Are The Real Winners

We already knew there 2 tickets claiming the jackpot, one in Missouri and one in Arizona.

The winning couple from Missouri are Mark and Cindy Hill, who have already been publicly revealed at a press conference. They will collect a cash lump sum payment of around $192.5 Milllion. And are already looking forward to, as they put it, a “pretty good Christmas”. I’ll bet they are.

Now the winner from Arizona has not yet been formally identified. But ABC News reported a man checking his numbers at a gas station in Maryland who appeared to be the second winner.

The man looks pretty happy, and also shows his ticket to colleagues and the store clerk too. When interviewed later they confirmed the story. Needless to say, the man didn’t look anything like Nolan Daniels.

All that remains to be seen now is if Nolan has sufficiently upset any legal types. Maybe one who would like some extra publicity testing if Nolan’s claim to pay someone $1 Million actually amounts to a legally binding contract. I think the sooner Nolan confirms it was just a hoax the better his chances…

So if you want to create your own fake Facebook lottery winners story, bear these tips in mind:-

Better luck in the next draw Nolan.