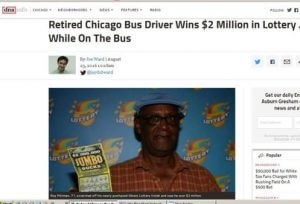 At 71, Roy Pittman is retired from his bus driving job, but he still plays the lottery now and then.  It was while he was riding a bus when he learned that his fortunes have changed for the better.

Pittman had bought a $10 “Jumbo Bucks” instant ticket from the Vincennes Food Mart before boarding a bus.  When he scratched it, he discovered that he had won the top prize of $2 million!  He now says he will share his winnings with his family and give to his favorite charitable organizations.  The Vincennes Food Mart earned $20,000 for selling the winning ticket.