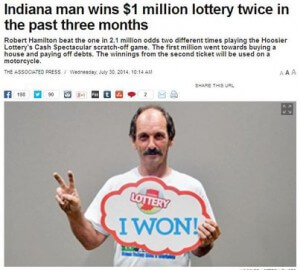 Robert Hamilton posted a million dollar win from a scratcher ticket he bought at an Indianapolis convenience store last week.  While many people have won million dollar prizes, the recent win is Hamilton’s second million dollar win – he won a similar amount just last April!  He has not only won twice, he achieved the feat in just a few months!