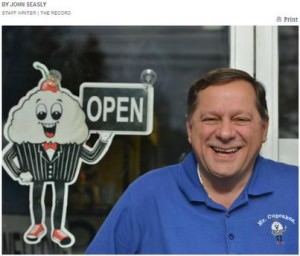 Many times people ask of lottery winners: what has he done to deserve such luck?  Some winners claim they have been playing for a long time while some say they have a great need of the money.  Then there is the case of a man named John Manganiotis – everybody who has learned of his $1 million win says it could not have happened to a better person!

Manganiotis just happened to buy a couple of tickets on a whim while on a delivery run for his son’s cupcake business.  His son Johnny informed him he had won, which he would not believe at first.

Now being the person that he is, Manganiotis had breakfast and lunch at fast food restaurants on the day of his win.  As for the money?  He plans to use some to care for his mother, to give to charity, and decide what to do with the rest later.  He says he is happy where he is and the money is just icing on the cake, or maybe the cupcake.