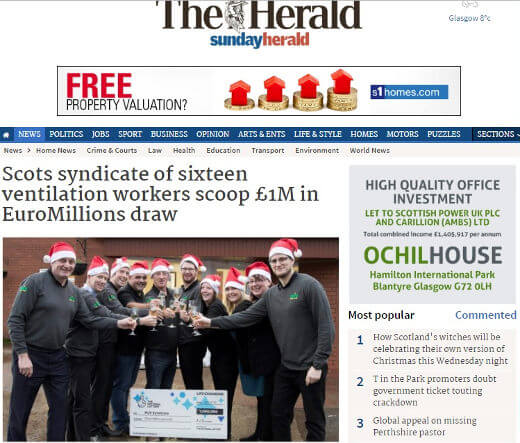 The lottery has spread some Christmas cheer to a sixteen strong Scottish workers syndicate.  The group, who call themselves the MJV syndicate, is composed of workers from MJ Ventilation in Coupar Angus, from where they took their name.

The lucky workers have been playing together for less than a year.  The group regularly bought 16 lucky dips for EuroMillions, one for each member, every Friday starting just this February 2016.  And it was syndicate leader Darren Graham who discovered the good news after he had their entries checked at a local SCOTMID.  The teller said they’d won something substantial but don’t know exactly how much.  She advised Graham to call the lottery offices.

But before he called the lottery, Graham decided to check the results online.  That is when he noticed that one entry’s Millionaire Raffle code had won for them a million pounds.  He immediately informed his colleagues, many of whom thought he was just joking.

Each member will take home £62,500, and many of them don’t have plans for their share yet.  Graham says he might put in a deposit for a house.  They bought the lucky ticket from the SCOTMID Co-operative at The Cross, 1/3 Commercial Street, Coupar Angus.  Interestingly, only eight members agreed to be named publicly.