Thai Farmer Donates To Hospital After Winning The Lottery 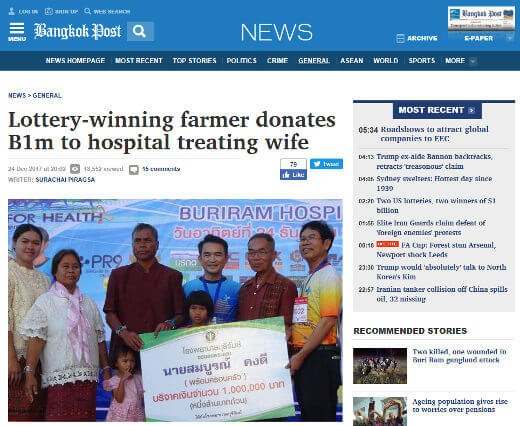 A heavily indebted Thai rice farmer won 12 million baht in the lottery and promptly made a promise to donate a sum to the hospital treating his wife. Somboon Khongdee has since made good on the promise by donating one million baht to the Buriram Hospital in Muang district.

Before his lottery success, the farmer had already pawned his farm lot for 270,000 baht in order to fund treatments for his wife. His wife needs to travel to the hospital for dialysis treatments twice a week. The cost of travel and treatment is what caused him to be so heavily indebted.

Then a dream came in which he saw three digit numbers. He bought tickets which matched the numbers he saw in the dream and promptly won the top prize.

With lots of money from his lottery win, he now plans to pay off his loan to get his farm back and to build a new house. He will also buy a vehicle to transport his wife to the hospital for treatments. But he says he will continue to grow rice and cattle because he loves his work.

The lucky guy has also donated 20,000 baht to a local police station and says he loves helping people. He adds that if he wins again he will give out more donations. Maybe that’s his way of saying he’ll continue playing the lottery.