My grandfather hit the lottery, it changed his life and mine, but probably not in the ways you’re expecting. 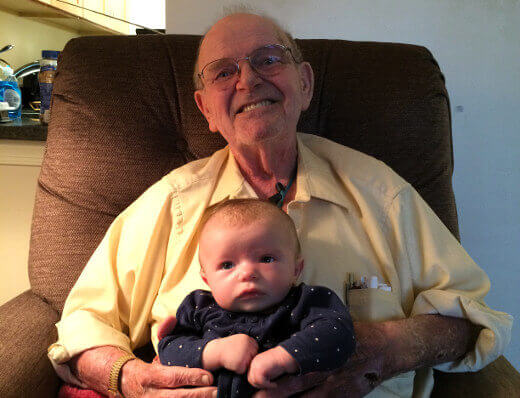 Many people dream of winning the lottery and the good life that comes along with hitting those six numbers. The odds are always stacked against us but people continue to dream about the possibility of winning. What has become a commonplace discussion around dinner tables across the state of Virginia rarely becomes reality. This would change for me though, as my grandfather, James O’Donnell hit the Virginia State Lottery some 20 years ago on September 10, 1997.

O’Donnell grew up in Philadelphia and spent his summers in Wildwood, New Jersey. However, those summers were not spent playing on the boardwalk or sunbathing on the beach.  Rather, O’Donnell spent his days selling pretzels and newspapers. Money was sparse in his family and he learned the value of a dollar early on. At the age of 16 he left home, joined the Air Force, and never looked back.

Fast-forward 60 years. My grandfather now lives in a Sunrise retirement home, his mind isn’t as sharp as it has been in the past; dementia has a way of doing that. Don’t be sad though, he wouldn’t want you to be, he’d want you to be happy about all that he’s been able to do for himself and most recently for me.

He has always been the most frugal man I’ve known, something that I couldn’t comprehend as a young man. You won the lottery, why don’t you splurge, at least a bit? Well, he did, on a 2005 Nissan Sentra, crank windows and all. I should mention that he chose to take the annuities, not the lump sum payout. As I mentioned before he now lives with dementia and his condition requires him to live in an assisted retirement home, which is not cheap. What would have crippled many family’s bank accounts was not a concern. The Virginia Lottery has allowed for my family to focus on what’s important, my grandfather, not how to pay for the care he requires.

I found myself sputtering within Virginia Commonwealth University classrooms, and with a job with the American Red Cross lined up, I decided to step away. Each and every time I visited my grandfather at his Sunrise apartment he would ask, “When are you graduating?” I was flustered with each one of these questions, because I myself did not know when I would graduate. His prodding over my education never ceased. Eventually, he mentioned to his daughter, my mother, that perhaps I go back to school and that he would help with tuition. I had known that I wanted to get back in the classroom, but now tuition would be taken care of. The Virginia State Lottery has allowed for me to get back to school and confidently answer when he asks when I will graduate.

People often think of the glamour that comes with winning the lottery but I’ve seen first hand that winning can be so much more than sports cars and boats.

My fellow Virginians need to know that winning can allow for life to continue. It’s not about the lavish lifestyles that the Virginia Lottery sometimes affords to the lucky, it’s about the opportunities winning can provide to the people who need it most. The most giving, gracious, and humble people are often the ones who win. The people who recognize how lucky they are but do nothing to change their lives, rather do their all to change others lives.