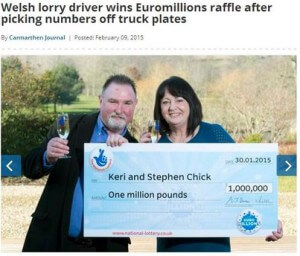 Lottery players are using significant dates, rabbits’ feet, dreams, fortune cookies and horoscopes to find the lucky combination which will bring them riches.  Odd as it may seem lorry driver Stephen Chick tried playing the numbers on the plates of trucks he was driving behind, and won!

But as he was too busy driving trucks, it took him a week to discover his numbers had won £1 million in the Euromillions draw.  After they received their prize the couple stated they will travel the world with her Dad, and help out their children and grandchildren.  And Stephen, he has no plans to retire from driving.