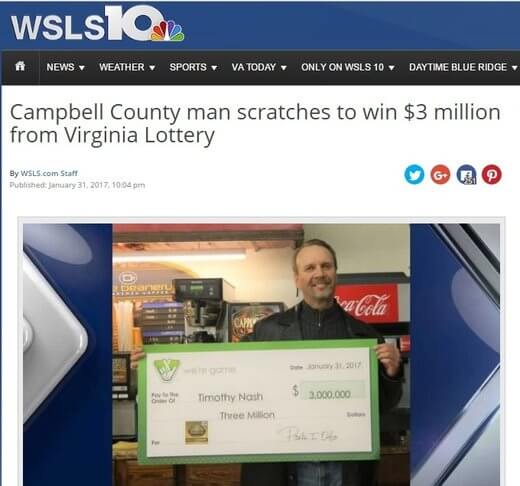 Tim Nash thought he needed a change of fortunes so he plays the lottery from time to time. This one time, he went to the Community Mini Mart on Pigeon Run Road in Gladys and bought two instant tickets which he promptly took home.

Nash was still in the garage when he decided to scratch off the first of two $3,000,000 Fortune tickets. He ran inside the house when he discovered he had won the top prize! Such was his excitement that his wife thought there was something wrong. But it was only their fortunes drastically changing for the better.

By the end of the month he was back at the store to receive a check from the Virginia Lottery. The store earned a $10,000 bonus for selling the winning ticket.

At the moment Nash is still in consultation with financial advisers about whether to take the prize in a single pre-tax payment of $1.6 million or to choose to receive the full amount spread over 30 years.

The winner says that despite his newfound wealth he has not made any plans for the money yet. And in his excitement, he has not even gotten around to scratching off the second ticket!