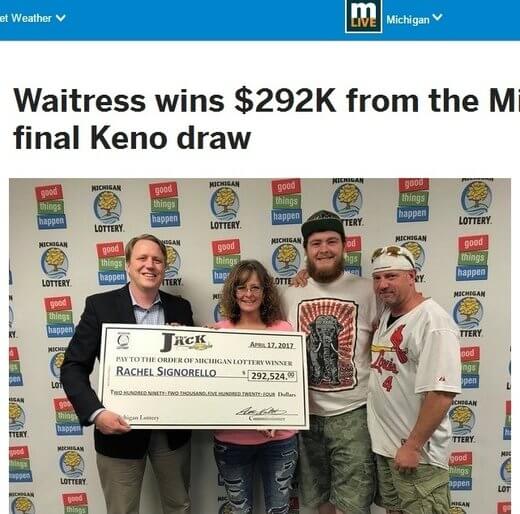 A waitress at the Playoffs Sports Bar and Grill earned much more than tip money just because she heeded her husband’s advice to keep playing.

Rachel Signorello was working as usual and her husband, who was visiting her at work, had been playing the Club Keno game.  When her husband finished playing and went home, she just kept on working. But soon she received a call from her husband asking her to keep playing because he “had a feeling.”

Signorello used the last $10 she had to buy a 2-spot ticket for five draws. The first four draws were duds, but the last one won for her a  Club Keno The Jack prize of $292,524 from the Michigan Lottery. And to think that she  would not have played if her husband had not asked her to!

When she re-watched the draw from the lottery website, people started congratulating her. She locked herself up in a bathroom to regain composure after realizing she had won.

She now wants to pay off bills, buy a new home, donate to a charity that supports Huntington’s disease and save what’s left. As with most winners, she’s happy to be relieved of financial worries.