War Vet Wins $300K Off Ticket He Received For His Birthday 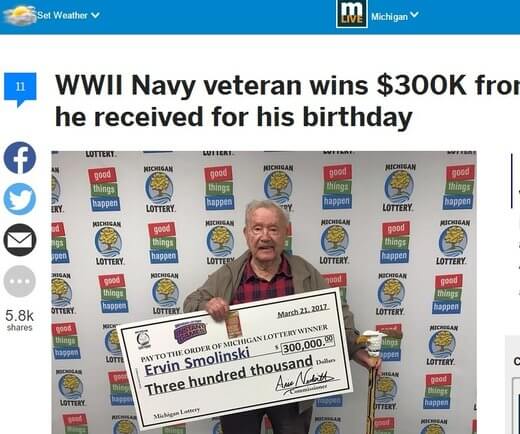 They say that you reap what you sow. That may explain why a 94-year old World War II veteran won a $300,000 lottery prize.

Ervin Smolinski buys instant tickets every month and sends them as gifts to family members who are celebrating their birthdays on that month. The practice has caught on with his family and now he also receives lottery tickets and some chocolates for his birthday.

One of the tickets he received was a Double Bonus Cashword from his daughter-in-law. And it was this one ticket that gave Smolinski a $300,000 lotto prize.

The lucky man says the win will not change him much because he is a frugal man. Still he wants a newer used car and a new shed. The bulk he wants to invest. He also says the biggest change is that he would not have to worry about money in the near future.